Initially known as “Grout’s Corner”, the village of Millers Falls was founded in the early 1800’s as a farm community by Martin Grout. The community developed and prospered in the mid to late nineteenth century due to its strategic location at the juncture of major railroads and to the cheap hydropower provided by the Millers River, which fostered the growth of industry including the Millers Falls Tools Company and Millers Falls Paper Company.

The architectural character of Downtown Millers Falls is largely defined by the rebuilding campaign that followed the “great fire of 1895”. This fire destroyed all but one of the buildings that had previously accommodated Main Street businesses in the early years of the villages’ development. The devastating fire did not dampen the spirit of progress, as Millers Falls’ active trade and industry allowed for an almost immediate recovery and rebuilding of its commercial center. As a result, most of the historic structures existing on Main Street and Bridge Street today are of the late Victorian period, reflecting the post fire building campaign. One outstanding example of this architectural heritage is the Ward Block, described as “the best example of a wood framed Victorian Mansard building in the town and a focal point of Millers Falls”. Others include the Equi’s block, which recently underwent a major restoration effort, and the Powers Block.

In travelling through Millers Falls, one is most impressed by the human scale and charm of the village. The village center is surrounded and embraced by hills, which give the area a definite sense of enclosure and intimacy. This intimacy is also reinforced by narrow side streets, defined by stone walls, the human scale of surrounding neighborhoods, which include many late Victorian style homes with “gingerbread” detailing, church steeples and the Millers River which forms the village’s northern boundary. Although the Millers River no longer plays the role that it once did in the economy of the village, it is also an important visual element.

Although Millers Falls has experienced a long period of economic decline following the departure of the traditional industries, it did undergo a major revitalization effort during the early part of this decade which was largely grown from within the community. The public portion of this effort included the upgrading of physical elements including the commercial streetscape and restoration of historic facades. The village has also experienced a growth in new businesses. More important to the revitalization, however, are the individual contributions of community residents in annual beautification campaigns, the resurrection of block parties and other special events that both bring the community together and serve as an attraction for tourists travelling along the Connecticut River Scenic Farm Byway.

Millers Falls is located on Route 63, south of Route 2, along the recently designated Connecticut River Scenic Farm Byway. The Byway follows the Connecticut River along Route 63 and Route 47in Massachusetts through the communities of Northfield, Erving, Montague (Millers Falls and Montague Center), Sunderland, Hadley and South Hadley. As a major focal point along the byway, Millers Falls is an excellent example of a traditional New England mill village. Besides the historical and cultural attractions that exist in the village center, the area surrounding Millers Falls also provides many opportunities for visitors to leave the byway for scenic and recreational enjoyment. Fishing, picnicking and canoeing, including the annual Rat River Race in nearby Orange, or just observing the beauty of white water during peak flows, make the scenic Millers River a popular regional attraction.

Nearby state park facilities and wildlife management areas also provide a good reason for a side trip. Leave the byway in the center of Miller Falls and follow directional signs to the Wendell State Forest. The forest, located just across the border in Wendell is a state park facility, which offers opportunities for swimming, hiking and fishing at Ruggles Pond. The park is also the site of the annual GMC Truck Rally. Another nearby attraction is the Montague Plains Wildlife Management Area, a fifteen hundred acre, state wildlife refuge and unique ecological area, operated by the Massachusetts Department of Fisheries and Wildlife. The “Plains” are a rare pine barren, which supports habitat for many rare plants and animals. The Montague Plains area located on a large sand delta that was formed more than 10,000 years ago when melt water streams from the retreating glaciers emptied into Glacial Lake Hitchcock, a huge lake that covered much of Montague and the Connecticut River Valley during the glacial period. The Plains are a popular attractions for nature walks, ecological field trips for the nearby University of Massachusetts and Greenfield Community College students, hunting in season (pheasant, deer and small game), dirt biking and mountain biking, and mushroom collection.

Another attraction is Beaver Hollow Wetland, a scenic overlook located on Millers Falls Road (across from the Highland Cemetery) which provides an outstanding vista of the Millers River and adjacent wetlands. This site is particularly scenic during the fall foliage season when red maples are in peak color. Not far from this overlook, a few miles down East Mineral Road, is the Cabot Camp. The camp, currently owned and used by Northeast Utilities as a meeting center, served as a toll house for tow boats and barges passing through the French King gorge during the early 19th century. Commerce on the river, above the waterfalls at Turners Falls, was made possible by the construction of a series of locks and canals at Montague City in 1798. Cabot Camp is located at the confluence of the Connecticut and Millers Rivers, beneath the well-known French King Bridge. Views of this segment of the Millers Falls riverfront, one of the most outstanding in the region, can also be viewed from the French King Bridge. The view shed includes a vista of the Waidlich Farm, which is protected under a permanent conservation easement with the state. 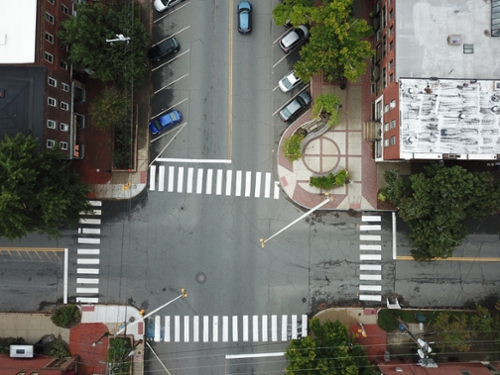